Shane McConkey & In The Name Of 'Gnar'

Shane McConkey is known as the godfather of freeskiing and ski-base jumping.

He started out on his road of freedom and sheer awesomeness at Squaw Valley, California.  Through his talent and ability to use his trademark irreverent humor, he inspired countless lives. Shane figured out how to live life to the fullest – on his own terms, in his own amazing way. His passion for life leaves an open invitation for others to do the same.

Ski insiders have always been aware of his incredible mix of mastery and mayhem: if ever there was an embodiment of “from the sublime to the ridiculous,” it was Shane. He could render you breathless with his skills one minute and leave you laughing the next.

On March 26, 2009, Shane McConkey died while skiing in the Dolomite Mountains in Italy, after performing a double back flip from the Saspardoi cliff - McConkey intended to glide away in his wingsuit, "a stunt he's executed a number of times", according to a statement from Matchstick Productions, the company whose films McConkey often starred in, but McConkey struggled to release his skis. By the time he got them off, he had been free-falling for 12 seconds and was too close to the ground for his wingsuit or parachute to do him any good. His parachute did not malfunction; it was never deployed. He died on the scene

Unofficial networks and the skiing world in 2010 commemorated the fallen hero by resurrecting a game that Shane had invented with his friend Robb Gaffney in Squawvalley - G.N.A.R, short for 'Gaffney’s Numerical Assessment of Radness' — as a point-based system for determining who was the 'raddest' skier at Squaw within a given time frame, be it a week or an entire season... now used on on daily basis throughout the world.

G.N.A.R. points are awarded based on the discomfort a situation presents and your attitude towards conquering it. Following that formula, stomping a big cliff air might get you 500 points — but skiing that same line naked after shouting at the top of your lungs that you were 'about to rip the s--t out of it!' would earn you over double the points. G.N.A.R. points are also won or lost for random acts as defined in the rulebook: Losing your goggles in a crash costs you 1,000 points, while skiing into the High Camp hot tub fully clothed earns you 10,000.

The Unofficial Game of G.N.A.R. commenced on Tuesday March 9, at about 4:30 a.m., or at least that’s when the first contestant arrived at the KT-22 lift line to claim his 3,000 points for first chair. What transpired once the lifts spun is unlike anything the Valley had seen in many, many years. 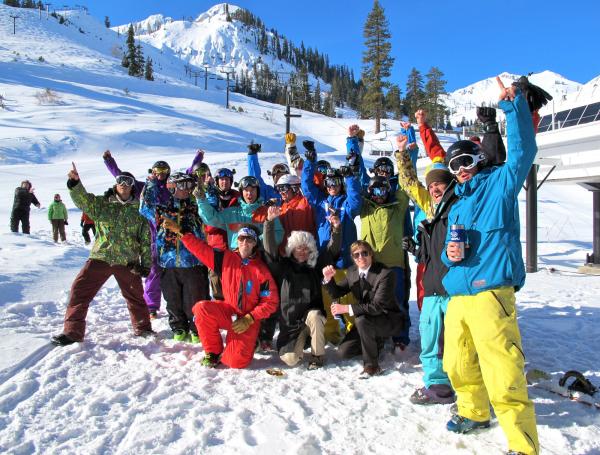 Not only did every skiable line get ripped, but the zany competition pushed the athletes to up the ante and toss tricks or look for other means of scoring extra-credit points. One skier tossed an inverted Lincoln Loop off the Fingers to earn a 1,000-point trick bonus. Dozens of skiers dropped technical 'BN' lines — BN being short for Butt Naked — and earned even more.

The freak freeskiing fun showed no signs of stopping until about 2:30 p.m. when a BN run went sour. Squaw Valley General Manager Mike Livak personally caught one of the contestants skiing naked after a Palisades lap. Livak was not amused. He pulled the skier's pass (5,000 point penalty) and asked to speak with Unofficial. Despite attempts, Unofficial was unable to contact Squaw management that Tuesday evening.

Since this day the game of Gnar has taken the skiing and snowboarding world by storm and you will regularly meet people (mostly students) who will tell you or your friend that they are 'so much better than you'.  I ask that you not be embarrassed, shocked or ashamed but to live a little and say it right back to them with a cheeky grin...

The full list of rules for G.N.A.R can be found in Robb Gaffney’s ‘Squallywood’, and you can watch the wonderful film here, but below are just some of the ways to score points in the game…

Point winning scenarios must be witnessed by another player or otherwise caught on camera:

If you play the the game of Gnar, no matter how old you are, I promise that your ski holidays will be a lot more fun and just that bit more memorable.